Back to Forgotten Heroes

Dr. Kaiserling in his medical uniform.

He became chief surgeon of the Army Reserves.

He was stationed on the Russian front. When the Bolsheviks took over Russia and made peace with Germany, he was sent home. On the way home the train stopped in Romania, and the troops on the train were asked if any doctors were on board as the local doctor had died. Dr Kaiserling got off the train to tend to the sick, contracted Typhoid Fever and Diptheria and subsequently died, 28th January 1918, at 0400 h.

He left behind a wife, a 5 year old daughter, and a son, 7 months old, the father of Herr Holger Kaiserling. 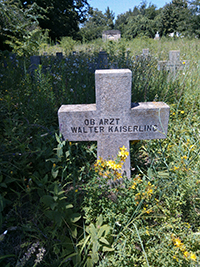 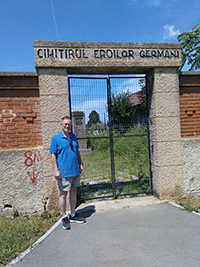 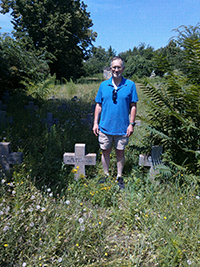 In 2012, the Alexis Project discovered in Craiova a cemetery dedicated to German heroes from WW I, where was sleeping Dr Walter Kaiserling.

Today, in 2018, 100 years since the hero was on earth, his grandson, Holger Kaiserling visited his grave, with our friendly help.

Dr Kaiserling's wife received this letter from Craiova in 1920. The letter states that the crosses on the graves had been removed as they were being stolen. A marker with the number 137 had been placed on his grave, and a German nurse had decorated the grave with roses.

As I promised to you and your family, I was today at an important cemetery in Craiova town, Dolj County, Romania, where there is a large cemetery for the graves of heroes from WWI.

The grave is in good condition, is not numbered, but is engraved with the name of your grandfather. It is the original grave, as was communicated to me by the administrator of the cemetery. The administrator also said that from time to time, German people come to celebrate the heroes buried here.

I strongly believe that we should not be sad for those who have died, because, although he dies, a hero comes to life forever, being an example for everyone in the future.

I also strongly believe that we, any and all kinds of people, have to forgive the past, but never forget it. It should help us to attain real peace between us, friends and enemies, together, under the wing of history.

Your grandfather becomes my grandfather, and you may be sure that I will take care of him from now on. I am grateful to you for giving me the opportunity to celebrate a brave man, such as your grandfather was.

With great respect to you and your family,