Fishing on the rivers of Romania 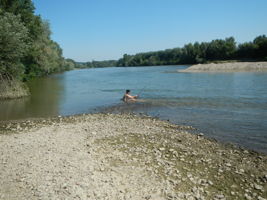 Here is a picture in which a person is trying to fish in the Jiu river, trying also to convince us that results will come only if you try! 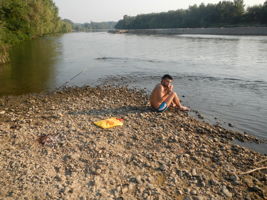 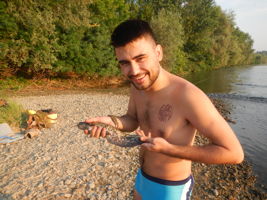 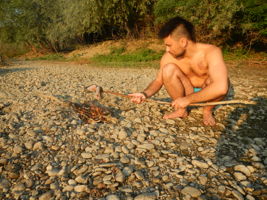 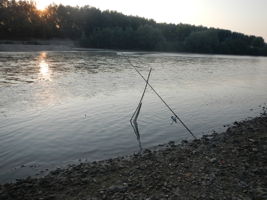 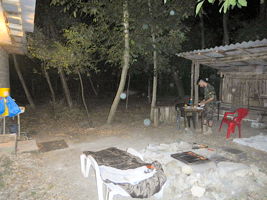 After a lot of hard work, the NGO Alexis Project team had a one night break on the Jiu River, beginning their work again the next morning. 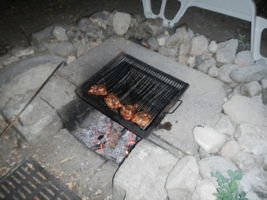 As someone who is dedicated to nature, Alexandru is ready to do everything to show his abilities as a good cook!

This is to instruct the novice in how to fish:

First choose a good place such as the right bank of the Jiu River, shown in this photograph.

Then you should have good bait such as worms, and good fishing gear.

Then, it is better to be part of a team, such as me and my son Alexandru.

The fact that there are no fish, is not so important, so long as the other things are taken care of!

Today, after a week of heavy rain in the area, and passing through a huge muddy area with wet clay, I was on the Jiu River, at a place called Balta Manastirii, the Monastery Lake, close to Bilta village, trying to beat Alexandru's fishing abilities, even though he was not there.

Although I was alone and just playing at fishing, I had a huge success, with a few fish from a fish kindergarten, but enough to earn the title Champion of the day!

Fishing on the Jiu River

Today me and my dad were fishing on the Jiu river, at a new place, on a sandy beach. We had an outstanding success and we proudly present to you only two (out of hundreads, ha-ha!) of the fish we caught.

Last but not least, it must be sad that my grandmother enjoyed them and she was proud of us, as you also are, we are sure!

Fishing in the Danube Delta

I saw you already received an e-mail from my proud dad about me fishing with my best friend, Mihail, in the Danube Delta, at the end of the St George Chanel (Sfantul Gheorghe in Romanian), where it meets the Black Sea. I believe it is time for some better photos, some more explanations and a complete record of our success there.

Each and every photo presents to you a different fish and they are in chronological order. The first one shows my first catch ever using a fishing swivel, an asp, that I got with my first throw that day at about 200 metres upstream St George Channel from the meeting point with the Black Sea. You can see the swivel in the photo, also the rod, a brand new one I got especially for this trip to Delta.

The next day, I decided with Mihail to go fishing very early, before sunrise, and we did so with great success. As you can see, the first fish was a small but beautiful luce, than some more asp fish followed. I am very glad to tell you that Mihail was fishing for the very first time with a rod and he managed to learn very fast. He got a pretty big one out of the water with number four in the series.

Mihail learned to make excellent throws and with some effort he managed to catch his own fish, that made him jump for joy on the bank of Danube!. He was a very good apprentice and I am looking forward to going fishing with him again soon. Meanwhile, I also caught some asp fish, as you can see in the picture on the left.

The last picture is the best for me, as this is the biggest fish I have ever caught with a rod, an asp which measured more than 50 cm long. It was all good fun for about 4 hours and the best way to start a day in Danube Delta.

One more thing I want to tell you: all the fish that we caught in both days was set free as soon as possible, with minimum injury. Both of us decided not to keep any of them because this was not the reason for us fishing. We had plenty of good fish to eat from our hosts in the village, so we only fish for fun, as a sport, and a good way to spend time in the middle of nature.

We tried to move the fish quickly from the water, remove the hook from its mouth, as in the third picture, and put it back into water, making sure that first it got some fresh water in its gills and that it recovered from the shock. We believe it would be best if many more followed this way, to set fish free with minimum injury very fast, to make sure there is enough for everybody to enjoy, and that the fish population, not only here but everywhere, stays strong!

P.S. : Since I said Mihail was my apprentice for one day, I must not forget my teacher. I owe everything I know about fishing to my dad and I hope I also was a fast learner near him. I know that now I am far from his record - the 2 metre catfish - but I work hard to catch up. Thank you, Dad!

Fishing in the Jiu River

After long and hard work in the Vogna valley to improve the ruins there, part of the Alexis team (Adrian and Alexandru) went fishing in the Jiu River.

This area is near Bilta village, and provided a peaceful moment in between two tasks of the project.

Many people come to this area for fishing, in the wilderness, a beautiful landscape, and a good opportunity for tourists to stay here during their holidays.

Even though it is late autumn, at the end of October, still there are fishermen on the banks of the Danube.

The Alexis Project team fishing on the Jiu River, near Bilta village, at a place called "Balta Manastiri".

Ionut, Amelia, Alina, Alex, and Adrian lit two fires for warmth and cooking, and enjoyed the crystal clear night sky and the stillness of nature all around them.

They were fishing for cat fish, and as can be seen a nice one was caught by Adrian. It was a great experience.

Obviously Adrian is improving in his fishing prowess, if we judge by the size of the fish above compared with this "monster of the deep" thirty years ago when he went spearfishing in the Black Sea!

Alina, Alexandru and Adrian are fishing on the bank of the Danube river, near the village Cetate, situated half way between Garla Mare and Calafat.

Fishing on the Clisura Dunarii, part of the Iron gates gorge, at a point 40 km west of Orsova.

The Catfish, or Sheatfish, Siluris glanis, is the largest fish in the fresh waters of Romania. It is a grey fish without scales, but its skin is protected by mucus.

Although it has bad eyesight, the feelers or whiskers combined with good smell allow it to find food on the muddy river bottom.

Sometimes fishermen see no fish, and can become disconsolate, as Adrian is here, but the scenery at Dubova, about 40 km west from Orsova, in the Cazanele Mari makes up for the lack of fish.

Where the water is very deep, two empty plastic bottles are attached by a long rope to a heavy weight on the river bed with a baited hook. From time to time a man in a boat goes to check this set line.

Another method is to fish with a "Clonc"

Three men in a boat are needed. One pilots the boat, and puts it in the middle of the Danube. Another has a long line with a frog on a hook, with a heavy metal weight on the end.

The third man is at the back of the boat, and has a wooden cup with a rod fixed to its base, like a "plumber's friend", but made of wood.

The man moves the "Clonc", rhythmically hitting the water with the open cup rim. This makes a loud noise, "Clonc" which seems like a frog calling to big fish who hunt them as prey. The fish finds the frog on the hook, takes the bait, and is caught by the fisherman.

This is a small hand operated crane for a fishing net on the Clisura Dunarii.
The bottles of water on the end of the crane act as counterweights to make it easier to raise the net.

Fishing with a Cin

Fishing is a very popular pursuit for people on the banks of the great rivers in Romania, such as the Jiu, Olt and Danube.

In Bilta there is an ancient way to build a boat, like a "monoxila" or dug out canoe from the stone age.

They choose a very old and big specimen of a tree (in english a yew tree) called the Tisa, (the same name as a tributary of the Danube, perhaps it grows along the banks of the Tisa as well) or the Pluta, which is the cork tree. There are many such trees on the banks of the Jiu. Those who wish to make a Cin cut it down and take the trunk.

Then with a special tool called a Barda (In the Polish language also, barda means 'hatchet') they spend a lot of time to carve out the wood to make a dugout canoe.

This boat is called a Cin and is about 2 m long and about 0.5 m wide and about 0.3m high and is made from a single piece of wood.

The Cin has two paddles, made also from wood, about 0.5m long and about 0.1m wide, one for each hand to use to row the Cin across the river.

In the photos you can see one of the oldest Cins from Bilta. Dr Gheorghe has a Cin too, also a very old one, given to him by a man from Bilta for his museum. The man with the Cin is Florin Buligioiu, a man about 70 years of age who has spent his entire life on the waters of the Jiu doing a lot of fishing.

No matter what the time of year, every time the Jiu gets high and fast and the water is muddy, he goes to fish (you can see how he goes to fish even in the depths of winter!!!). He puts the boat into the water from the banks of the Jiu where the water is shallow, and then goes upstream to where the fish are, at the intersection of the Jiu and Motru, to the west of Bilta, about 3 km upstream. Every time he comes back with at least 1-2 kg of small fish, but he has caught fish up to 25 kg in weight. All night long in summer, a lot of people from Bilta (even without Cins) go fishing and usaully are able to bring home fish from the river.

This is a very old Cin in Dr Gheorghe's possession.

The Cin has two paddles, one for each hand of the user, and they are very small, about half a metre long, so they may be used easily by one hand to move the Cin through the water.

Another tool used for fishing are the nets shown here. Some are for one man, some are for two men to handle, each holding one of the sticks, some are 30 metres long by two metres high, and are used by teams of five or six men.

These nets are called Cotoci, and are used both by day and by night, along the Jiu and the Motru, though less so on the Gilort River.